Catching up with one of the greats from the Midwest, Old Guys Rip Too is honored to ask a few questions of Dale Rehberg. Dale grew up in Chetek, WI, eventually making his way out west to Colorado, California and Washington. He was part of the 90s movement of riding logs, stumps, and handrails, and was at the origins of the OG 90’s style. Dale had a career as a pro snowboarder for over a decade, riding for several companies including Joyride and Ride snowboards. Dale was responsible for progressing snowboard design and snowboarding style in the 90s and continues to put his mark on the snowboarding industry to this day.

OGRT: Thanks for taking the time to catch up with us Dale, we truly appreciate it. It’s finally snowing in California! Where will you be getting your early season riding in this year? 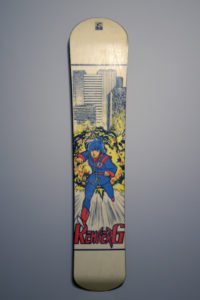 DR: Ha… YES, it’s great to see snow flying here on the West Coast. It’s very much needed and I’m pumped to see it happening. For myself I do the typical So. Cal trips to Bear / Summit. Hoping to get up to Mammoth or Tahoe at some point this winter as well. We’ll see how it all goes, but I’d really like to get back up to Baker as well.

OGRT: You were originally from Wisconsin; when and how did you get into snowboarding?
Any other sports that you enjoyed growing up?

DR: I got into snowboarding from seeing it at the local mall. Someone had set-up a little desk and had an old Sims movie playing. I really have no idea who it was or how they knew about snowboarding, but that was the spark that lit the fire. I was an avid water skier growing up, I did all the mid-west events and focused on slalom skiing. I also was involved with the local water ski club and did jumping, barefoot and all that. Of course I was into Skating as well. that was my real passion growing up for sure.

OGRT:How often did you ride growing up?

OGRT: How did you get noticed, and who were your first sponsors?

DR: After my first winter of riding and competing I was really into getting sponsored so I was sending out my resume to companies. I got sponsored by Burton immediately and rode for them through high-school.

OGRT: When did you realize you wanted to move out west and pursue snowboarding further?

DR: I pretty much knew I wanted to be in Colorado since before I snowboarded and when I was skiing. I’d take winter trips to Colorado with my good friend Roan and his family. So, I knew that is where I wanted to be as soon as possible.

OGRT: Dale Rehberg and Roan Rogers (go together like peanut butter and jelly) — you both grew up together; how much did you push each other in the early days, and how often do you guys ride together now?

OGRT: You spent some time in Summit County and Breckenridge in the early 90s; how was the scene compared to So. Cal.? Any memories that stand out to you about that time?

DR: Breck was a great place for 2 winters. I was pumped on it. It was mellow and their were a lot of snowboarders around all the time. When I moved to So. Cal. it was totally different (obviously) more about skating and partying…maybe not the best thing to do, but it was a damn good time. I was lucky enough to have a good sponsor so I was able to travel a lot to ride and it was always nice to go home to sun and beaches.

OGRT: You decided to not stay with Burton in 1991, and left for the Joyride team. What were the main reasons behind that decision?

DR: The summer I graduated High-School (91) I went to Mt. Hood for the summer with Roan and my other good buddy Tom. That is where I met the guys who were starting Joyride. They were super cool and they had big plans. They wanted me to be part of it and I was down. At that time I was a no-name at Burton, just a regional rider and nothing special. I decided to take the risk and jump ship. I figured I was not going to be anything special to Burton, maybe ever, and that Joyride was pumped and wanted to do stuff with me. That is all I really wanted so I did it. No regrets at all there!

OGRT: Cutting down boards and T-bolting for a wider stance became pretty common in the early 90s. How much tip and tail did take off your boards, and how wide of a stance did you go with in those days?

DR: HA. yeah, Roan, Nate Cole, Jake Blattner and myself were for the sure the first people to cut a board down. (Tarquin may have done it before us, but I can’t remember for sure) and I know Tarquin and Quinn were going really wide with the stances years before… We would take a dinner plate and trace it onto the board, then get a jig saw out and cut it, file the sharp edges off and it was ready to go. Factory stances on boards at that time were not over 19 inches wide and I think I would t-bolt mine to a 22.5 inch stance. I never went wider than 23 inches.

OGRT: For myself, and many others, when The Hard, the Hungry and the Homeless came out it truly brought natural features, park & street elements to the forefront of snowboarding. At the time, did you think it was going to have such an impact on the snowboarding community?

DR: I had no idea it would impact snowboarding like it has. Really, it was just fun for us to do after a full day on the hill, we would go out all night and ride rails… Funny how it goes.

OGRT: Riding for Joyride and then becoming a founding member of Ride Snowboards, you had some fun characters on both 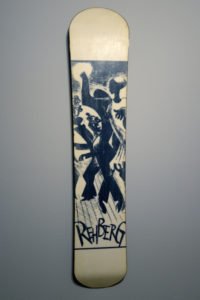 teams in the 90s. Any fun memories of a trip or moment that has stuck with you over the years?

DR: Oh, that’s for sure. A lot of great people and interesting attitudes for sure. I have so many really great memories and it’s hard to pin-point one specific story. I just know that we all had a really good time traveling around the globe and snowboarding.

OGRT: You had an outstanding 12-year career snowboarding; did you ever think it was going to be that long of a ride?

DR: I never really thought about it to be honest. I thought I was going to snowboard forever and this was my job. Obviously things change… When I decided to stop riding professionally, the industry was in an ugly place in my eyes. I was not into what was happening and I needed to move on. It was a great run and I am pumped I got as much out of it as I did.

OGRT: Any major injuries during your pro career?

DR: My only really major injury was a broken collarbone and broken arm. I did have 4 knee surgeries but that was all before I started snowboarding. That stuff was from water skiing (flat landings off the jump)

OGRT: Any special exercise/training regimens that you’re pursuing so you can ride at your best these days?

DR: Nope. I just try to stay in shape as best I can. Ride mountain bike, surf, etc.

OGRT: After your pro career ended you were able to find a home internally as a brand manager for several companies, President of Allyance, and currently the Marketing Director for Flow Snowboards. How have you kept the stoke alive over all these years, and where do you want to go next?

DR: I have been lucky but I also have worked hard for everything. I am passionate about the industry and it keeps me going. I wouldn’t mind transitioning into the food business at some point, some day. I have a passion for cooking, so I could see that happening some time in the future.

OGRT: So. Cal. is your home base, but I’m sure your current position has you traveling quite a bit. Where do you ride these days, and are there any spots left on your bucket list?

DR: Yes, my home is So. Cal. and I do travel some, but not that much really. I am lucky if I get 10 days in these days. I’m very focused on my family and that takes up most of my free time, but I’m ok with that. If I get 4 POW days in a season, I’m pretty good to go…

OGRT: As snowboarding has matured over the years, it’s had highs, lows, ups and downs and we’re all getting older. Most snowboard parents, such as yourself, are now hoping their children will enjoy snowboarding as much as they did/do.
There are now multiple generations in the mix, and the younger generation presents challenges with maintaining interest in the sport.
What are your thoughts, as an athlete and an industry professional, on keeping snowboarding healthy and growing for both youth and mature riders?

DR: That’s a tough questions and it’s something we talk about here at Flow quite often. I think it is super important that the industry continues to try to get new participants involved and realizes that there is an entire group of non-core snowboarders to support, as well as to continue to push and cater to the real core rider. To me it is really 2 entirely independent groups of people that make up our industry. We know that the core riders will continue to ride, but we need to make sure that everyone will continue to ride, not just the really core people. It’s a hard thing to do and I feel we all need to realize this and figure out how to get more participation and growth.

OGRT: A tie-in to the last question: does the entire Rehberg family ride together? Could there be another Rehberg pro in the family?

DR: HA. Yes, we all ride together. I am proud to say that. I am not going to make any predictions here about my kids following in my footsteps. I really just want my kids to enjoy snowboarding as an activity that they do for fun… not a career. I’d be happy if that happens.

OGRT: Again we greatly appreciate the time Dale. It’s time to let them know… Old guys rip too!
DR: Thanks for the space here. I wish you guys all the best and hopefully I’ll see you on the slopes!