Even before we saw Gilson Boards line up at SIA, we were curious how a board company could exist in PENNSYLVANIA!!! So, we checked out their site and were intrigued by the technology of a 3-D base, soft edge, and pow channel. How could this possibly work? What would it look like in person? How this would transition to park riding (soft edge without the pow channel)? And finally, how would the pow channel float in powder? A lot of questions! 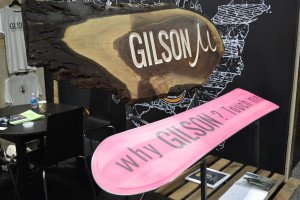 We were so curious, we went one step further and looked up the designer and proprietor, Nick Gilson. At first glance, he’s a young entrepreneur, smart, educated, with a background in craftsmanship passed down from his dad; he took this knowledge and transferred it to boardsports. He’s in this for the right reasons: he’s passionate and loves what he does — something we respect.
Once we met Nick at SIA, we could tell he was the genuine article. He truly stands behind his product because it is his life, and you can feel that when he talks about Gilson. The entire team at SIA (Hannah, Danny, Nate, and Pat) share this passion; that takes something special to create, especially when you’re building boards in Pennsylvania, remember?!

The boards are beautifully made, with tasteful topsheets, and the 3D base, soft edge, and pow channel technology delivered in person. It truly was a sight to see.
But we know seeing is one thing, hearing how they ride and how the tech works is another, and we weren’t buying the hype until we got on a Gilson. Nick offered, and we accepted! 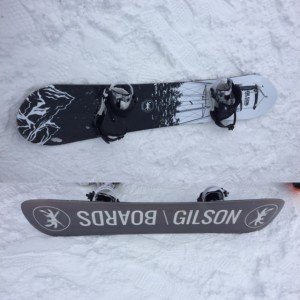 The Pioneer 155 rode really well in powder; I hardly ever ride traditional camber anymore so it was quite the pleasant surprise. I was able to just slightly put pressure on my back foot, and I went into a good powder riding position. The pow channel and soft edge opened up fun pops and moves all over the mountain — it truly was a different feeling, it was a fun ride! The stance on these boards can run really wide so I had to tighten it up (not sure how wide it was) a few times. Riding cat walks and hard pack was a new feeling again. The soft edge held, but allowed you to feel more “surfy,” and it picked up speed really well. It took some time to get used to, but it worked for me. Using the hard edge on hard pack and really laying into a turn I felt a little like I was going to wash out but never did. This was something to note, but I may have just needed more time on hard pack with this board to figure it out. Gilson Boards technology offers something different to add to your quiver, and if you’re looking for a custom ride, these are worth looking into.

We did question the base waxing/grinding method, as it won’t work with traditional waxing tools very well from what we saw; Gilson will be putting out a tutorial soon on these topics. 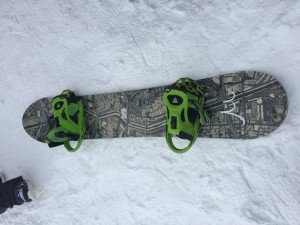 As we mentioned above, we had a ton of questions about how these unique boards would ride, turn, etc.  The entire Gilson crew was amazingly helpful in getting us set up.  I first went out on the Bacon 160, Gilson’s all-mountain board.  Unfortunately my stance was set a little wide compared to what I normally ride, but I adjusted quickly and powered through.  It took a run or two to really feel comfortable on the Gilson board, but I’ll tell…it’s next to impossible to catch an edge on these, and they are rockets in powder.  Riding these boards is a very different feeling; on hard pack I was able to keep the board very flat, and kept waiting for an edge to grab.  Buttering around was the same way: I kept waiting to grab an edge, but with the soft edge tech I’m not sure you can catch an edge. 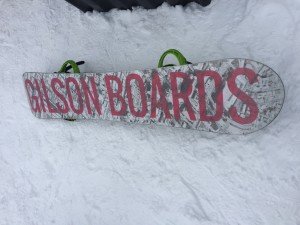 After a few runs, I switched over the the Pioneer 155cm. The Pioneer is another all-mountain board, but has Gilson’s Superflex technology vs. the Smoothflex on the Bacon.  I was a lot more comfortable on the Pioneer, as I prefer a more flexible board.  I’ve been riding rocker/camber boards for so long I wasn’t sure what to think of a board without it; the Gilson boards were surprisingly very easy to ride, and I was able to get more comfortable with each run we took.
The Gilson crew also put my 11-year-old son on a Pioneer 140.  It was a bigger board than he was used to, but he kept up with us all day with no problem.  He adapted to the Gilson board very quickly and had a blast.