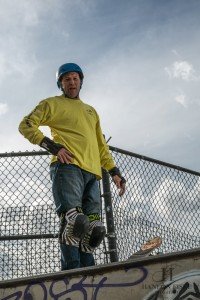 Joe Lehm, the founder of Skate School in Santa Fe, New Mexico, began skating at 8 years old in 1969, and has been riding ever since.

The school certifies instructors to teach the fundamentals of traditional skateboarding: street, transition, longboarding and racing. The curriculum is the most comprehensive approach ever developed for teaching skateboarding, from how to do it to where to do it, and why!

OGRT: Joe, I greatly appreciate you taking the time to speak with us. Let’s get right to it…how did you get your start in skateboarding?

JL: On steel-wheeled roller skates. I was about to hack them up to mount onto a piece a wood when my parents stopped me. I got a Black Knight with clay wheels, then a Makaha. My first board with urethane wheels was a GT Grentec. By the time Kryptonics came out, we were making our own boards in wood shop class and riding them at the Bear in ABQ.

OGRT: Give us a run down of your skate career. 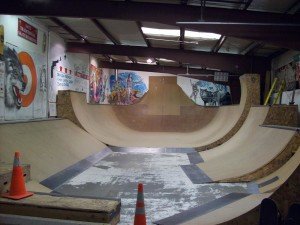 The ramp at skate school

JL: I am from Los Lunas, NM, where we formed a team in 1976, and skated and competed in ABQ as often as possible. I lived in Los Angeles every summer through high school, and got to skate some of the iconic parks from that era like Reseda and Upland. In 1979, I moved there, and Marina del Rey became my home park. At that time, I also was riding a lot of pools, desert pipes, and hills in the Griffith Park area. When I moved back to NM, I rode a lot of ramps, street, and of course the ditches of ABQ were starting to pop up around 1984 all over the place!

OGRT: How did you get into longboarding and racing?

[pullquote]I was already finding myself teaching skaters of all ages at the local parks because so many parents were drawn to the fact that my team and I were the only ones wearing helmets and pads and knee sliding when we fell. [/pullquote] JL: I have been longboarding since around 1976, because that was the only way you could ride the Bear with its 45-ft. walls and kinky transition. In LA, I used it for transportation and to ride hills. I had done some racing in the late ‘70s, but got seriously back into it after seeing it on the Gravity Games. My first pro DH race was at Pikes Peak in 2000, and my first pro slalom race was in Breckenridge, CO in 2002. Having the Sandia Crest Road and the ditches of ABQ right here in our backyard definitely contributed to me doing a lot of longboarding over the years.

OGRT: I have a bit of a biased opinion, since my son was one of your students. Skate School is an amazing place; how and why did you start it? 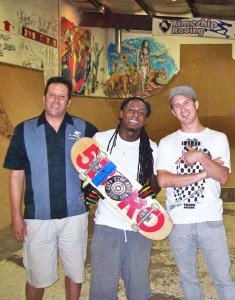 JL: I opened Skate School in 2004 in Santa Fe, NM. I was already finding myself teaching skaters of all ages at the local parks because so many parents were drawn to the fact that my team and I were the only ones wearing helmets and pads and knee sliding when we fell. I have also always enjoyed encouraging skaters to try different kinds of skateboarding because I enjoy it so much. I figured an indoor park could offer the community something unique, and could double as a good training center for my team. We have a varsity, junior varsity, and a few graduates that have gone on to earn Pro Models from major companies. Our famous ‘3-board minimum’ keeps everyone’s all-around skills strong, which is what our riders are known for.

OGRT: You really teach the roots of skateboarding; how and why did you come up with the curriculum you teach?

JL: It took awhile to develop, but it also became clear that the way to teach skateboarding was in the same order that it evolved. Push, stand, steer, switch stance, kick turn, pump. The basic moves and vocabulary come from surfing. I have developed a student-testing format that helps the teacher determine what level the student is at, and what to work on to get to the next level. This is a key part, because most skaters don’t know what to work on to get better, they just pick something randomly. All of our lessons come with ‘homework.’ Some of the intensive camps like Race Camps come with a couple of months worth. Most skaters are self-taught, which is one thing that makes skateboarding so accessible to so many people. Getting some instruction now and then can go a long way though!

OGRT: Give us your favorite skateboarding memory.

JL: That’s a hard one to nail down to a single memory! How about a couple? The giant vert ramp that we had in the North Valley of ABQ in 1987 is a good one for sure. It was 36-ft. wide, 10.5-ft. transitions, and 2.5-ft. of vert, with tombstones, an escalator, and a 4-ft.-wide channel. Five of us lived in a six-bedroom house on two acres, and we hosted some EPIC skate parties! Being a local at Marina del Rey in its heyday, and skating the Turning Point ramp with Jerry Valdez every week was amazing! We watched Christian Hosoi go from 10-year-old mini-grom to the powerhouse blaster he became in just a couple of years. Most recent would be having Tony come out to ABQ to support my event the All Around Challenge and mention me by name in one of his interviews. 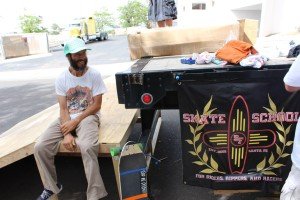 Tony Alva at the All Around Challenge

OGRT: What is Timeship Racing and how did that come about?

JL: Timeship Racing started in 2001 with myself, Will Brunson and Casey Duncan. We bought leathers and helmets, made our own slide gloves, and started practicing going really fast and learning to stop! I figured there’s nothing faster than a Timeship. We raced at Pikes Peak in CO; Maryhill, WA; Breckenridge,CO; Gravity Fest in Madison, NY; Top Challenge in Montreal; and put on the Sandia DH Challenge in ABQ for six years in a row. Will Brunson was our top dog for several years, winning Top Challenge and landing on the podium at nearly every race he attended. He was one of the first pro downhillers to get his own Pro Model; it was made by Pocket Pistols, and we have one on our wall of fame here at the school. After making dozens of pairs of slide gloves myself out of motorcycle gloves, and selling them at events to stoked riders, I eventually sourced a factory that could make what we wanted, and introduced the first ever production slide gloves. We called them “Tracers,” and they were a big hit. Timeship went on to sponsor many of the top racers and champions around the world, continued to develop several slide glove and safety innovations, and sponsored nearly a hundred events. In 2013, I sold Timeship to Resource Distribution, which is the parent company for Paris trucks, Divine wheels, and Riviera boards, and also sponsors four pro riders that have come out my Skate School program.

OGRT: You put on some great events and help sponsor others. Give us a quick rundown of those.

JL: The first event I organized was the Sandia All Around Challenge, which ran from 2001 until 2006. I organized the US Nationals of DH on Vail Pass in 2004 and 2005; Maryhill North American Championships in 2005 and 2006; the Atomic Bomb in Los Alamos, NM in 2010;  and Ditch Slap in ABQ, NM starting in 2007 and every year since. I’ve also organized about a dozen other slalom and banked-slalom races in ABQ, including reviving the World’s Largest Banked Slalom Course at the Bear. It takes you from 0 to 30 mph in 2 seconds! I’ve also hosted dozens of events at Skate School, including an annual event that takes place during Indian Market and features live bands, muralists, and a skate jam…all at the same time. [pullquote]The main thing I do to avoid injury is to use the knee slide techniques EVERY time I bail, in every terrain whether I need to or not.[/pullquote]

OGRT: What injuries have you had over your skate career, and what do you do now for injury prevention (yoga, stretching, etc.)?

JL: In 2001, I broke my first bone (my wrist) at the age of 40 going over the spine at Los Altos skate park right after it opened. I raced my first race at Pikes Peak with the cast squeezed under my leathers. Not bad considering how long I’ve been skating! The main thing I do to avoid injury is to use the knee-slide techniques EVERY time I bail, in every terrain, whether I need to or not. I stretch nearly every day and do Feldenkrais moves to keep my back tuned up. 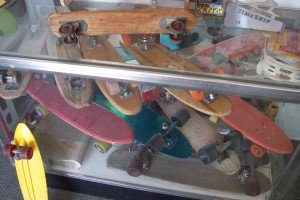 Some of the skate history on display

OGRT: How often do you skate?

JL: I do a lot of low-level skating when I’m teaching regular lessons, a few hours a week; more medium-level skating per week during summer skate camps at the parks and on the hills; then a couple hours of ‘hard’ skating usually on our Sunday Sessions with the team. I also like to do some longer distance riding / pumping on the bike paths to get and keep my heart rate up for while. Riding the required 3-board minimum is not usually a problem for me.

OGRT: What do you think of the progression of skateboarding?

JL: It’s a three-part cycle that just keeps repeating itself over and over: The progression of equipment leads skaters into new terrain, which then leads to the progression of talent. This cycle has been repeating since steel wheels and sidewalks gave way to clay wheels, and banks gave way to urethane wheels and skate parks. Improved safety gear and knee-slide skills have led to the Mega Ramp and 23-ft. airs. Reverse kingpin trucks have now led us to steep hills and 50-mph slides. Equipment-terrain-talent and around again. I don’t see why it should ever stop! 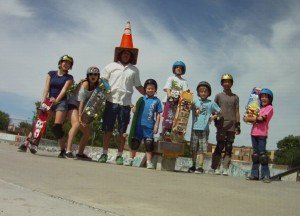 Joe and some of his many students

OGRT: Who are some old guys that rip, that you still like to watch?

OGRT: What about the young guns? Any favorites?

JL: Old Guys Rip Too, and so can you! 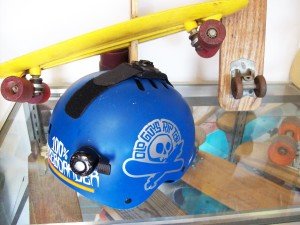 If you’re ever in Santa Fe, New Mexico, stop by Skate School. It’s a great place to skate; Joe has a lot of cool skate memorabilia, and is one of the good guys in the skate business.