Since launching their first longboard, the Vanguard in 2002, Loaded Boards has been pushing the evolution of board sports to new heights.  Combining their passion for the sport with unique material and top notch craftsmanship they developed the Icarus.  In Greek mythology, Icarus is the son of the master craftsman, Daedalus.  Often depicted in art, Icarus and his father attempt to escape from Crete by means of wings that his father constructed from feathers and wax. Icarus’ father warns him first of complacency and then of hubris, asking that he fly neither too low nor too high, so the sea’s dampness would not clog his wings or the sun’s heat melt them. Icarus ignored his father’s instructions not to fly too close to the sun; when the wax in his wings melted he tumbled out of the sky and fell into the sea. 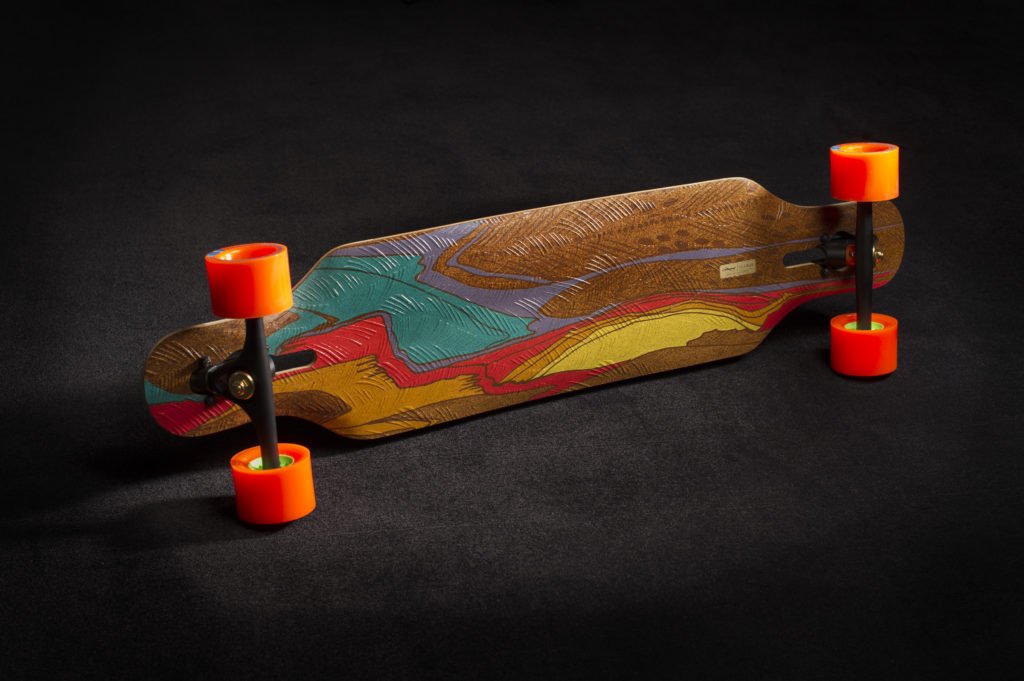 The Icarus longboard will definitely make you feel like you’re flying but in all likelihood, you won’t melt or end up in the sea.  OGRT was really excited at the opportunity to demo this board.  We reviewed Loaded’s snowboard offering, the Algernon, this past winter and were blown away at the craftsmanship.  The Icarus is absolutely gorgeous; natural wood grains, aggressive lines, and a really unique 3-D base graphic.  There are two models of the Icarus based on flex, a Flex 1 and Flex 2.  The Flex 1 is the stiffer of the two and is recommended for riders weighing 170-200lbs.  The Flex 2 is the more lively and playful of the two and is recommended for riders 75-200lbs. I reviewed the Flex 2, as it fits my riding style a little better.

The Icarus is narrower than most boards I’ve ridden, coming in at 8.6″ wide, but this really helps keep the board light. The construction of the Icarus has a few interesting and unique features that really enhance the ride.  The Icarus uses epoxy and triaxial fiberglass with a 5-part vertically laminated bamboo core.  This is all pressed into a concave and convex camber which creates a lively and very responsive ride.  One of the things that caught my eye was the wheel well flares.  Loaded uses “biscuit” inserts to create the extreme curvature.  They used these “biscuit” inserts to mitigate stress on the board and prevent cracking.  Another thing that really stood out is the base, it’s a cork layer used for damping the ride.  Loaded took advantage of the soft material and pressed it into a pattern that looks like feathers, playing on the Greek mythology the name comes from.

Riding the Icarus took a little bit of getting used to.  The convex definitely throws you off looking at it but once you step onto the board it flattens out.  The Flex 2 was an absolute blast, crazy responsive and super flexy.  Its flex really allows you to lean into carves and gives it a surfy feel.  I found that it really was a lot more playful and responsive with super loose trucks. Pumping into the board’s flex really makes the board come alive.  The configuration on the Icarus I rode was Loaded’s Go-To-Setup, the 80mm Kegels Wheels were perfect for gripping aggressive carves.  My only complaint was the board was a bit narrow for my feet but the concave was enough to lock my feet in.  The Icarus was a blast to ride, lightweight, super-responsive and just down right fun to carve on.