Lonny Hiramoto was the inventor of the “footplant.” He started skating in 1976 at age 11, and won the first-ever televised skateboard contest that was held at the Runway skate park in 1979. He turned pro just two short years later, at age 13, with Kanoa Surf.

OGRT: Lonnie, thanks so much for taking time to do this.

OGRT: You’ve been skating for almost 40 years, how does hearing that make you feel?

OGRT: How did you get your start?

LH: When I was around 10 years old, we lived in Santa Monica, and Shogo Kubo used to hang out with one of my sisters. I would have to say that watching and hanging out with him was a big influence in my life. This inspired my desire to start skating.

OGRT: What was your first board set up?

LH: I believe it was a Black Knight.

OGRT: You turned pro in just two years; how did your skating advance so quickly?

LH: We moved right down the street from the Funnel, and then they built the Runway Skate Park. It was so close that I was able to skate every day. I pretty much lived there.

OGRT: Who were some of your early influences or mentors?

OGRT: You had a nickname of “The Little Emperor”; how’d that come about?

LH: Well, back then, I was making a lot of money for my age. I was pretty spoiled and got what I wanted. I called the shots. So, John Falahee, Tuzo Jerger and Sally started calling me that and it pretty much stuck.

OGRT: You invented the “footplant.” Tell us about that.

LH: Back in the day, my back foot always came off when I did backside airs (it still does today!). One day I saw Eric Grisham doing something similar, so I started doing it and adding my own twists until I landed them. 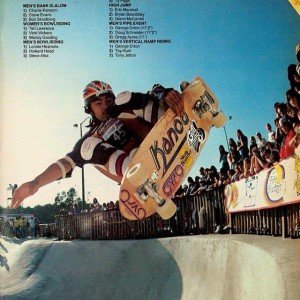 OGRT: Competing and winning the first televised skate comp, what was that like?

LH: At the age of 13, it was pretty crazy being on TV! Channel 2 Sports Spectacular! It was pretty trippy.

OGRT: Who were some of your sponsors you’ve had over the years?

LH: C&D was my first. Kanoa Surf, Tracker Trucks, Gull Wing, Gyro Wheels, Dale Smith, Madrid…these are most of them from early on.

OGRT: Who all do you ride for now?

OGRT: Who designed your Flood Kontrol Samurai graphics, and what’s the meaning behind them?

LH: Bobby Brown re-did the original graphics with some changes, from my Smith model. As for the meaning, being Japanese, the Samurai represents strength and a warrior. 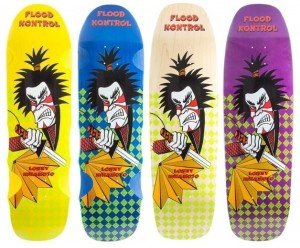 OGRT: In your travels as a pro skater, what was your favorite place and why?

LH: Japan. It was one of the best tours I had ever been on. The entire experience at that young age was awesome! It was so beautiful and super fun too!

OGRT: How often do you skate now, and with whom?

LH: Not enough. Lol. Maybe twice a week. I skate with Lester Kasai, Bennett Harada, Christian Hosoi, my buddies, and whoever else is out!

OGRT: With four decades of skating behind you, what’s it been like to watch the evolution of skateboarding?

LH: Man, it’s so incredible! The tricks and level of skating are gnarly! I love seeing the kids (and girls!) just killing it, and they make it look so easy!

OGRT: Who are some of the old guys that still rip? 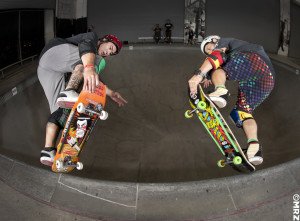 OGRT: Being older, we do not heal as fast; talk about how you deal with injuries you’ve had over the years.

LH: Yeah, I definitely don’t heal the way I used to! I’ve had some pretty bad injuries…hip, knee, shoulder, and even broke my toe! Now, when I get hurt, it takes me out of skating longer than it used to. I just take it easy and deal with each injury until I can get back on my board.

OGRT: What’s one thing people should know about Lonny Hiramoto?

LH: Haha. I don’t know. I’m just grateful to still be rolling around on my skateboard, and love skating with anyone!

LH: To God, for allowing this old man to still enjoy my passion. All my sponsors over the years, and all my friends who push me to keep skating!