Nicky Guerrero, aka the Guroman, hailing from Copenhagen, Denmark got his start skating in the late 70’s. He turned pro in 1987, riding for Gordon & Smith. In his late 40’s now he still competes all over the world.

OGRT: Nicky, thanks so much for doing this. What’s new with you?

NG: I was in northern Spain last weekend and I won the “Volcom La Kantera Pro” in Algorta. The bowl was a bit difficult but I made some good lines and nice tricks. Other than that, I work full time as a Kindergarden teacher and social worker in Copenhagen. And I have another hobby, DJ’ing, collecting vinyl records and scratching.

OGRT: I rode 2 of your G & S decks back in the 80’s. Funny story for you…a bunch of us were skating a handrail, the property manager came out and was not happy with us. We skated off and were skating a ditch nearby. The guy followed us and wanted all of our names…we gave him the names off the boards we were skating…haha. So I was Nicky Guerrero for a day.

NG: That is funny. One time I was riding the train with no ticket and the conductor came to give me a fine. I said that my name was Stevie Caballero, and it worked. 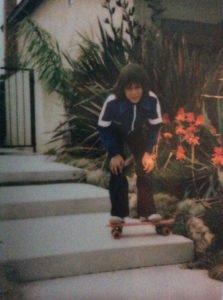 OGRT: How did you get started in skateboarding?

NG: I was on summer vacation in LA the summer of 1977 and my Uncle Bob gave me a little red plastic GT board that I took with me home to Denmark.

OGRT: Growing up in Denmark, how was the skate scene?

NG: Skateboarding in Denmark was growing. We got our first skateboard club in my home town Herlev. It opened the first of August 1979. We started on a small 6 feet high quarter-pipe with a slalom style start ramp to get speed.

OGRT: Skateboarding was booming in the U.S. in the 80’s. Was it tough for you to get noticed by sponsors residing in Europe?

NG: Not really, but later it was hard as a pro. But in the beginning, I entered the European championship in Rouen France 1983 and placed second in vert. The winner, Claus Grabke, asked if I wanted to get sponsored by Tracker Trucks, and I said yes.

OGRT: Who were your first sponsors?

NG: My first sponsor was Tracker and Titus skates from Germany. I got better and better and got picked up by Gordon & Smith the summer of 1985, by Billy Ruff and Danny Webster, who were at The Scandinavian Open in Helsinge, which I won.

OGRT: You became a pro for Gordon & Smith in 1987, talk about that a little. What did that mean to you? How did it change your life?

NG: In the summer of 1986 I won a big sponsored Am contest I Phoenix, Arizona, the prize was a $1000 scolarship, and I skated against the top Am’s at the time, Jason Jesse, Buck Smith and Henry Gutierrez. In the autum of 1986, I won the European Championship in Warrington, England. At the end of the year G&S asked me if I wanted to turn pro. Since it was my biggest dream at the time, I said yes. I had to give up my school, but I promised my family that I would go back to school, if the pro life did not work out. I came over to the G&S factory in January 1987, and they had my first pro board ready.  I did not have any influence on the first shape or graphics, but I was super stoked.

OGRT: You teach kindergarten and are a social worker, when did you go back to school?

NG: I went back to school in 1993 and got my high school diploma. Then in 1998, I started the kindergarten teacher and social worker education which I finished in 2002.  But I have been skating the whole time since, work and traveling in my free time.

OGRT: Let’s talk about your pro model graphics, is there a meaning behind the masks?

NG: My second graphic on G&S was the Cyclops scull made by my friend in Denmak, Carl Christian Madsen. He sent the grapic over and I liked it and G&S liked it, so it happened. When I skated for Powell Peralta in 1990, I had a meeting with Shaun Cliver at the Powell art department. We looked in a book with Polenesiaen art and saw the mask, and we liked it.

OGRT: How did you end up signing with Powell and what was it like being a member of the Bones Brigade?

NG: When I was rookie for G&S they had the more established pro’s like Neil Blender, Chris Miller and Billy Ruff. But by 1989, they had moved on and now I was the best on G&S, and I had the feeling that it was time for me to move on as well. Powell was starting up a big Europe expansion, with a Powell warehouse in Amsterdam. My skateboard friend from Denmark, Frank Mesmann, was going to run this operation, and I was asked to join Powell Peralta.  Since the Bones Brigade was the best team at the moment, I said yes, and I was stoked to be part of it, and ready and willing to skate and learn from the others.

Being a member of the Bones Brigade was a great experience. I was mostly on the European tours, and for 2-3 years we did around 40-60 demos a year in Europe with different skaters from the team, so I was on tour with Mike McGill, Stevie Caballero, Tony Hawk, Lance Mountain, Ray Barbee, Frankie Hill, Ray Underhill, Bucky Lasek, Tommy Toiminen and more.  We had some great tours, all over Europe, we would go from one big city to the next, skating big demos with the best in the world. 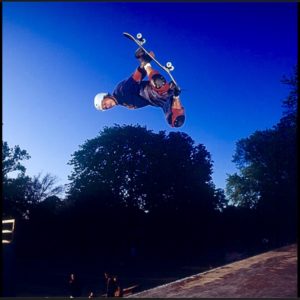 Nicky blasting a big Japan Air in the Powell days.

OGRT: Talk about your decision to leave the Bones Brigade.

NG: I left the Bones Brigade in 1993 when I started school. Powell was cutting down on the pro team. The other pros started their own companies, and vert was not hot anymore. So it was actually good for my body to take a break.

OGRT: What does it mean to you to be able to share skateboarding with your son?

NG: My son is almost 6 years old now, we have been to the skatepark a few times, We skate together on my board, but he does not want to ride alone yet.  I started when I was 9 so I’m not in a hurry. But it is great to be able to skate with him.

OGRT: I watched you in the 2017 Vans Bowl-A-Rama, you’ve still got a big bag of tricks. What’s one trick age prevents you from doing?

NG:  I lost a lot of tricks in 1993, I was able to do frontside boardslide on vert, but I slammed hard on my hip once, and have not been able to get it back yet. I used to do stalled andrect handplants, but it’s like my body is not so flexible anymore. But two airs I miss doing are Japan Air and Crooked Cop, I had a few knee injuries in the past so my knees don’t like to over stretch in that way anymore.

OGRT: What goes through your mind watching young guns like Kiko Francisco and Asher Bradshaw?

NG: I get totally stoked and kind of inspired. When I skate with these young rippers, I’m like, hey I could try that or work on this. I love to see up and coming vert rippers go off. 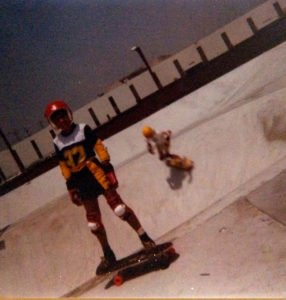 NG: Oh, I had a few. One time I hung up on a 6 foot backside air, in the last run of a final in France. I broke a collar bone. I have had some cracked and broken ribs, but that was street skating. The worst injurys have been, on the knees, landing wrong and stretching the inner ligaments in the knee a few times, it hurts like hell and takes a long time to heel.

OGRT: What’s next for Nicky Guerrero?

NG: Good question. I want to give back to skateboarding, what skateboarding gave me. Teach the youth some old school tricks. Show them some lines, and keep in mind that skateboarding is not only trick A, trick B, and trick C, but also a question about putting the tricks together and how you get from trick A to trick B and C. That is the real creativity in skateboarding, when your board is rolling and you feel the wind in your hair.

NG: Old Guys Rip Too! I have been skating master contest for 15 years, so what is next? I’ll be 50 next time, so maybe it’s time for the Grand Masters!!!