Powell Peralta® decks are made in the USA at our skateboard manufacturing facility in Santa Barbara, CA. Materials include U.S. hard rock maple, high strength fiberglass, AirLam fused with epoxy resin and are warranted against delamination for their useful life. Our graphics are created in-house using non-solvent based inks and paints to keep our atmosphere cleaner. 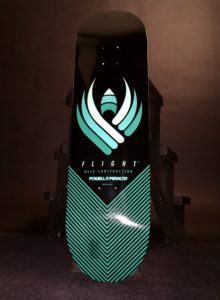 Powell launched the Flight Decks late last year with some bold claims and a video to back it up.  You’ve probably seen the video by now, they run over a deck with a car.  The deck does not break and still has pop…crazy!  Powell advertises the Flight Decks are lighter, thinner, stronger and last longer.

Skateboard construction hasn’t really changed much since its early days.  The wood used, glues, shapes, and concaves have changed but most decks are still a 7 ply skateboard.  Several companies have tinkered with different methods of construction with mixed results.  I was skeptical due to Powell’s last hybrid construction attempt, Boneite.  Boneite was supposed to make Powell decks stronger and lighter but they had numerous issues.  The decks chipped, broke in strange directions and delaminated if it got wet.

The Powell Flight deck is made of maple wood, an epoxy glue, and fiberglass reinforcement.  It is noticeably thinner than your standard 7-ply deck.  On a scale, it weighed a little over 1 oz less than several other 8.5″ decks, on average I found it to be 5-10% lighter.  The deck seemed a little stiff when I first started riding it but broke in some and I adapted quickly.  These decks are super tough, I am 6’0″, 190lbs so I put decks under a fair amount of stress.  I’ve ridden this board hard for 3 months and there is not a single stress crack.  Sure there are dents and dings but the board has really held up well and still has great pop.

The Flight Deck series has a shape number attached to it, 216-280.  In the initial run, it basically had to do with the shape of the nose/tail and length.  But now they’ve added pro models for several of the Powell pros like Charlie Blair and long time Powell pro, Steve Caballero.

In summary, the flight deck boards are a bit pricey up front but if it lasts 2-3 times longer it will end up saving you money.  I have been really impressed with the toughness of the Flight Deck, it rides like a new deck three months in.  The tail will still razor like a normal deck and possibly faster since the deck is thinner. But dents and dings have not seemed to affect the deck at all and not a single chip so far.  My only complaint is the graphics are a bit lame but I’m sure future releases will have traditional pro model graphics.