Details:
We’re big fans of Stance snowboard socks; they’re tough to beat performance- and durability-wise.  Being old skaters, the Skate Legends Series really caught our attention.  Stance revisits their action sports roots with a line up of socks dedicated to the legends of skateboarding.

Review:
It’s nice to see a company that’s had massive growth and success take a look back and give a nod to their roots.  During their journey from skate and surf shops to being the official sock of the MLB and NBA, Stance has created a sock for just about everyone, even us “old skaters.”  For the Skate Legends series, Stance chose 14 of the most influential skaters to honor in the form of socks by taking designs right from their old board graphics; included are Natas, Barbee, Steve Cab, Hosoi, Cardiel, and Grosso, to name a few. This product is about more than socks, it’s about memories; for any skater who grew up in the ’80s or ’90s, these socks will evoke vivid recollections of days past. 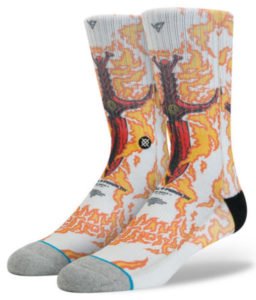 Socks are such a huge part of mobility and daily comfort, and this is where Stance changed the game and has excelled because of it. I’m really picky when it comes to my socks.  I like them padded in the right places, and not too thick, because nothing is worse than hot and sweaty feet!  I picked up a set of the Ray Barbee socks to try them out.  I’ve slowly been replacing my socks with the Stance Skate Legends series.  They are fun, nostalgic and totally functional and durable. The terry loop in the forefoot, heel and toe really does provide some added cushion in the places you want it most, making these socks extremely comfortable in or out of shoes.  I was worried about the colors fading with wear and washing, but they have held up amazingly well.  As a bonus, they are also a great conversation piece; I’ve gotten so many comments and compliments on my socks, which is not something everyone can say.  Socks don’t have to be boring; go back to your roots and pay homage to the skate legends!